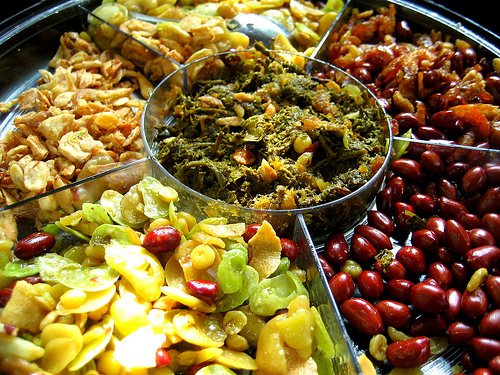 Myanmar is a country populated by 135 officially recognised ethnic groups, each of which has their own distinct cuisine – of which Burmese/Bamar food is the most widely spread. This guide will introduce the reader to traditional Burmese food, which consists largely of oil-based curries, salads with fresh or boiled vegetables, various types of salted fish recipes and soups, all of which are eaten with rice. Herbs are frequently used; ginger, turmeric, garlic, chili, lemon grass, spring onions and coriander being the most popular.

A typical Burmese meal will be served in dishes, and is great for sharing. Portions of each dish are taken and placed next to rice, which is normally in the center of the plate, and is eaten with a fork and spoon.

For soups a Chinese spoon is usually provided, but if not, you must use the same spoon for the soup. Drinking soup from the bowl is considered rude, however you may see some locals eating with their hands, as is common in South East Asia.

Traditional dishes have many versions around the country. One of the most popular is Mohinga, which is often eaten for breakfast; thin or flat rice noodles eaten with a fish based-soup or in bean powder-based soup when freshwater fish cannot be obtained easily. Another traditional dish served often at feasts and celebrations is Ohno-khauk-swe, which consists of Chinese-style yellow noodles and is eaten with chicken in a coconut-based sauce. It is very rich!

The Mandalay Restaurant at the Belmond Governor’s Residence; a high class experience that is popular with tourists, expats and wealthy Burmese.
www.governorsresidence.com/web/pyan/restaurants_bars_intro.jsp

“Feel” Restaurants; there are several branches, “Feel Myanmar Food” in Dagon has one of the better atmospheres, and is popular with both locals and expats.
www.feelrestaurant.com/myanmarfood.html

Other Restaurants in Myanmar

In Yangon and Mandalay there are many different places to eat. Chinese restaurants are the most common, but thanks to 4-5 star hotels and a growing number of restaurants catering to the foreign market, almost any genre of food can be located. This includes Indian, French, Italian, Japanese and classic American / European food served at various venues such as sports bars and tapas bars. 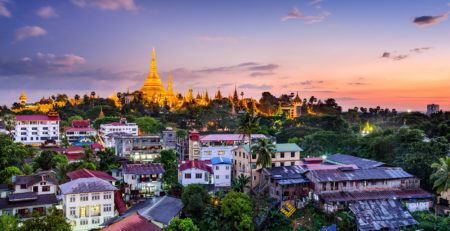 An Introduction to Myanmar